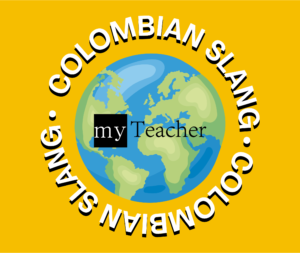 If you are planning to visit our country and enjoy all the wonderful places you can see, it is also possible that you are considering learning or practicing your Spanish in Colombia. It is really useful to know a little of this language to have a much more rewarding cultural experience and a complete Colombian immersion. For this reason, speaking Spanish can make a difference during your trip.

Taking Spanish lessons should be also a part of your itinerary, as it will allow you to feel connected to the culture, people and environment. However, it is also a good idea to consider that each place you might go has its particular vocabulary that helps people communicate more naturally and fluently. That is why, we would like to share with you some slang you can use in Colombia to “sound” much more colombiano. This is a part of the Colombian language you’ll be in touch with.

List of the 12 most common slang words in Colombia.

PARCE: this is a cool word to call a person “friend”. It is assumed that this word came from Portuguese where the word parceiro also means “friend”. As Colombia shares part of their borders with Brazil, the word became so popular with the past of the last years. Actually, Colombian famous singers like Juanes have used the word parce in many contexts that it is nowadays one of the most common and representative words of the Colombian language.

You can even use it in informal situations with people you do not know, so you can break the ice. People will know you are doing an extra effort to be cooler and nicer. So, we are pretty sure you will receive positive energy from them. Specially, because Colombian culture appreciate when foreigners do their best to appreciate how we live and communicate each other.

Parce is the short version for Parcero or Parcera. Of course, if you would like to use one of these words, you should take into account if you are talking to a girl or a boy.

For example: Hola, parcera. ¿Cómo estás? In this case, you are talking with a girl.

For example: Hola, parcera. ¿Cómo estás? In this case, you are talking with a boy.

Of course, be careful at the moment of saying this word. It is better to avoid this word in some scenarios when it is better to say formal things. For instance, if you go to a fancy restaurant, do not say to your waiter or waitress “parce”, you could sound out of turn.

FARRA: This is another word that came from Portuguese. Farra stands for “party” in this language too – and it seems to be a loan from the Arabic word “farhe”, which is also party or joy. So, if you are in Colombia, you must need to memorize this word to have a better communication while you learn Spanish in Colombia.

For example: Me encanta la farra en Medellín, which means: I really love party in Medellín.

[TENER] GUAYABO OR [ESTAR ENGUAYABADO]: if you like party and drinking, this is a must word. We use it to say you have a hungover.

It has as an unclear origin, but most of the linguistics and authors agree on the following explanation: the tree that produces the fruit “guayaba” (guava). It is supposed that this word became popular when people started expressing that the animals that felt really sick just look for the shadow produced by this three.

So, farmers used to say that, for instance, chickens and hens were “enguayabadas” or they had “guayabo” (like sick), when they spent most of the day under the protection of this tree with no movement or sound.

Is it not the same when you have hungover? We mean, we spent most of the day quiet and trying to avoid any movement, as we feel we are dying. That is why this explanation makes a lot of sense and it is accepted by many people. So, feel free to use this word to describe how you feel after a long party when you drank a lot of alcohol.

For example: Tengo mucho guayabo, which means: I’m so hungover.

POLA: Talking about drinks, if you like to drink beer you really have to learn this word. This is the Colombian Spanish way to say beer.

The origin of this word has to do with the revolution. There was a Colombian woman martyr called Policarpa Salavarrieta whose nickname was La Pola. She was a spy during the revolution time against the Spanish crown and she died because of that – being a heroin! When big brewery companies came to Colombia, the launched a beer called La Pola to get in touch with Colombian culture and sell its product easily. So, it worked. It was that popular that Colombian people started to say Pola instead of beer.

For example: Dame una pola, por favor., which means: give me a beer, please.

By the way, don’t be afraid of being direct with phrases such as “Give me” or “I want something”. This is polite in Colombian Spanish as long as you add por favor to your sentence. We don’t use phrases such as ¿puedo tener una cerveza? (May I have a beer?). That’s actually kind of weird.

CHIMBA/CHÉVERE: you can use either of them to informally express something is really cool.

These words have to do with the language of native people. It is not easy to explain how they words became the common way to say something is cool or awesome. But some linguists affirm that these words were the equivalent for “beautiful woman”. So, after the conquest of America, it is very probably these words were used to describe beautiful things in general. Now, they are part of the Colombian Spanish world.

For example: Este restaurante es chimba/chévere, which means: This restaurant is cool.

PLATA: Use this Colombian Spanish word to say “money”. It is also silver – the material.

It is very likely that in each country in Hispanic America there is a special and fun way of saying “money”. So, here you have some good advice, ask local people how they say “money” in a colloquial way in every country where you are to sound like a native of Spanish.

For example: ¿Dónde está mi plata?, which means: Where is my money?

MONO: This is monkey in Spanish, but we use it in Colombian Spanish referring to a foreigner. the origin of this word is pretty clear and easy to explain: it has to do with the color of foreigners’ hair – blond people.

TINTO: Do you like coffee? So, if you do, this is the name in Colombia Spanish for a black coffee cup.

For example: ¿A cómo el tinto?, which means: How much is the black coffee?

Yes, a cómo means how much in Colombian language.

CHARRO: This is a word commonly used in Medellín to say something or someone is funny.

PAISA: Now we are talking about Medellín words, this is the informal and common word to call someone who is from Medellín or the Coffee Area from Colombia, which includes other cities like Armenia, Manizales and Pereira. So, this is a must word for Medellín Spanish.

The origin of this word has to do with coffee farmers. People who worked on coffee farms were called paisanos among themselves. And, as always, we love to abbreviate the words, with the passage of time the people who worked or lived in these types of farms became simply paisas.

For example: Mi profe. es paisa., which means: My teacher is from Medellín.

LOCHA: Let’s end our list of common Spanish slang words with this one. Use this word to express laziness.

For example: Hoy es lunes, ¡qué locha!, which means: Today is Monday, what a laziness!

Now that you have learnt a couple of Colombian words you are ready for your trip. Learn Spanish in Colombia is easy and fun. Enjoy your trip and don’t forget to bring your sunscreen and even a jacket in case you run into some rain.

Learning a language is not just about memorizing words and grammar rules, it is also about understanding that the people around that language use special words loaded with particular meanings and unique stories. For this reason, it is important to consider that culture will always play an important role in any successful communication process.

If you like to learn and practice more don’t forget to take a look at our web page and social media to get information about our Spanish courses. You will find different kinds of Spanish lessons based on your needs, goals, and interests. You will also have an approach of Colombian culture to have a better experience with your Spanish skills.

To get more information, visit the following web sites: